Clinton Road, New Jersey: The most terrifying road in the U.S.

FIRST PERSON | About seven years ago, my cousin Julie and her husband Mark moved back to New Jersey from South Carolina. After months of searching, they found a great house in West Milford, New Jersey. Julie, who I grew up with, called me and asked me to meet them at the house and let them know my opinion.

After checking out a map online, I saw the home was on a street just off Clinton Road north of Route 23. I drove up Green Pond Road, got onto Route 23, and then turned right onto Clinton Road. Almost immediately, I noticed that Clinton Road was different from almost all the roads in New Jersey.

There were no homes along the road and no connecting roads. Clinton Road was very curvy and kept winding around between different bodies of water. At one point, I saw what looked like shack off to the right along a dirt driveway, and later on, I saw an old kiln by the road. But other than that, there was nothing along Clinton Road. Isolation was the word that came to my mind to describe the road.

After about 10 miles, I reached the street off Clinton Road where the house was. The house was great, with four bedrooms, three bathrooms, and a finished basement. It was perfect for Julie, Mark, and their kids. While looking at the house, I mentioned how creepy Clinton Road was. Julie’s realtor shot me a look and looked like she wanted say something not particularly nice to me, but she said nothing.

A few weeks later, Julie invited me and another cousin of ours, Mike, back to the house. They had made an offer on the property, and it was accepted, so they were having a little party one night after work. Mike and I drove up Clinton Road to get to the house. Within a mile of turning on Clinton Road, headlights again appeared out of nowhere and rushed up to us, but then backed off. I told Mike the same thing happened the first time on the road.

The headlights kept following us, and I was keeping an eye on them in the rearview mirror when Mike shouted, “Look out!” I hit the brakes and saw something like a giant white rabbit running off into the woods. Mike asked what it was, and I told him it was likely an albino deer. I had worked at the fenced-in Hercules complex in Roxbury, New Jersey, for a few years, and there was an albino deer on the grounds then. It would look like a lot of different things when it ran around at night.

As we finally approached some lights in the distance, the headlights behind us vanished as if they were never there. We went into the house and it was pretty cold, as the heat didn’t work. Mike told everyone about the headlights and the creature that ran in front of us on Clinton Road. One of the neighbors Julie and Mark had met and invited over, John, came over at the mention of Clinton Road.

“Clinton Road,” he said, “is the most haunted road in America.” John told us he had lived in West Milford his whole life and that Clinton Road was to be avoided at all costs. He told us a frozen dead body had been found along the road a few years ago. Clinton Road was where the mob dumped their dead bodies. He said that Satan worshipers would also gather along the road and then row out to an island in the middle of one of the lakes and perform satanic rituals.

He also said that strange creatures lived along Clinton Road. They were the result of interbreeding between the local animals and the wild animals that escaped from Jungle Habitat, which was a wild animal amusement park located in West Milford that was run by Warner Brothers in the 1970s. After Warner Brothers closed the park in late 1976, they were rumored to have let a lot of the animals just go into the local woods rather than pay to have them transported somewhere else.

He told us the headlights we had seen were from ghosts that would appear out of nowhere and follow cars along the road at night. That’s why the headlights suddenly appeared and disappeared. Mike and I laughed at what the neighbor told us, but we also asked him for another road to take out of there. He told us to take Union Valley Road, which paralleled Clinton Road and was not haunted.

When I got home that night, I went on the Internet and typed in “Clinton Road” in Google. I was amazed to find that Clinton Road was pretty famous as a haunted road. The frozen dead body story was true, the result of a serial mob killer nicknamed The Iceman who used to freeze his victims before dumping them. Jungle Habitat in West Milford was also real. I found tons of stories relating how terrifying Clinton Road is online. The Travel Channel did a show about Clinton Road, calling it the most terrifying road in America. Others have made scary videos about Clinton Road and posted them on YouTube.

In the end, Julie and Mark did not buy the house in West Milford because the home inspection turned up too many problems, including the heating problem. I was relieved to hear that because I did not want to have to travel along the most terrifying road in America, Clinton Road, to see them. But for anyone out there who wants to be scared to death, Clinton Road can be reached right off Route 23 in Newfoundland, New Jersey. The road runs about 10 miles between Newfoundland and West Milford.

If you do drive along Clinton Road though, you do so at your own risk. It is just a creepy, scary, isolated road. You have been warned by someone who has been there.

Ehren: Clinton road is lame. Silver lake road off 23… now that’s scary. In that same area on the south bound side of 23 you can see all those toys that someone put on the tops of all the telephone poles. It’s in weird NJ. I drive by them and Clinton rod almost every day.

Daniel: ONLY ROAD scarier is fairlawn ave. in FAIRLAWN NJ

Scott: ago I’ve never heard of Clifton Road, the only road in NJ that I know that’s extremely creepy and considered haunted is Shades of Death Road

Jack Spellington: You really should not have advertised Clinton rd. I live nearby and it is NOTABLE FOR DANGEROUS GROUPS OF PEOPLE and armed adults (those who have not yet been caught by police) looking to start trouble with a car full of teenagers. We have heard plenty of stories about kids at my school getting attacked and damage done to their cars. Ghosts are not real. Bad people are real. I’d also like to share that there is a high degree of DRUG USE in this area. Groups of people are probably strung out on who knows what and completely unpredictable, willing to damage your property, hurt you, or much worse all over stealing your wallet. Please stay away from Clinton RD

A Daily Mail Reporter: Cynics may dismiss it as a piece of driftwood as a trick of the light but a photograph showing what appears to be a long-necked sea creature has got marine experts scratching their heads.

Daily Mail : Is Nessie on her Holidays

More Than a Legend: The Story of the Loch Ness Monster

Legend of Loch Ness Monster for Kids: A Mystery in the United Kingdom 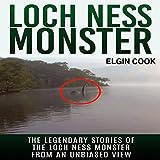