Casanova and the Sublime Madwoman

CASANOVA AND THE SUBLIME MADWOMAN by Dr. Daniel Rumanos

Prepare yourself for 18th Century Kabbalistic capers in one of the strangest tales you will ever read! Hot young girls, wealthy old ladies, ritual magic, Italian adventurers, and Jewish mysticism all collide in CASANOVA AND THE SUBLIME MADWOMAN!

Best known for his numerous love affairs, Giacomo Casanova was born in Venice, Italy in 1725. At various times he served as secretary to a cardinal, as a soldier, and as a professional violinist. In 1755, Casanova was accused of witchcraft and sent to prison. He escaped, and began to travel about Europe, hobnobbing with the rich and powerful.

Casanova did indeed claim to have magical powers and to be a Master of the Kabbalistic Wisdom. He made use of this persona to extract money from his wealthy patrons, probably the most interesting of which was Madame la Marquise d’Urfe, whom Casanova termed the “sublime madwoman”, an aging Parisian lady who fancied herself a devotee of the occult sciences. Madame d’Urfe wished to be reborn as a man, it being the belief at the time that only a member of the male sex could communicate with the spirits of te Kabbalah.

For this purpose, Casanova informed d’Urfe, it would be necessary to find a maiden whom he would impregnate with a male child. After the child’s birth, Madame d’Urfe would kiss the child on the mouth, magically passing her soul to him. D’Urfe’s current body would then die and Casanova would raise the little boy, who would contain her spirit.

For the “maiden”, Casanova chose a teenage actress of his acquaintance named Marianna Corticelli. Despite much great effort on Casanova’s part, Corticelli failed to conceive. In an effort to solve this emergency, according to Casanova’s instructions, Madame d’Urfe wrote messages to the spirit of the moon asking for guidance. Replies from the lunar spirit, written in silver ink on green paper, appeared out of thin air floating on the water of d’Urfe’s bathtub. The original plan was dropped, and Casanova then tried to impregnate Madame d’Urfe herself with the necessary male child, again without success.

D’Urfe died soon afterward, having overdosed on an occult remedy known as the Panacea. Casanova himself died in 1798 after penning his Memoirs, which are available in print to this day.

The standard English translation of Casanova’s Memoirs is History of My Life, translated by Willard Trask, currently in print in six volumes from the Johns Hopkins University Press.

There are those who say that Casanova has himself been reincarnated in this generation as a certain well-known parapsychologist and Kabbalistic Rabbi from Baltimore, Maryland. Upon this I must, however, remain silent.

The Complete Memoirs of Casanova the Story of My Life (All Volumes in a Single Book, Illustrated, Complete and Unabridged)

Conversation Casanova: How to Effortlessly Start Conversations and Flirt Like a Pro 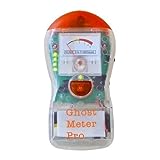 This is basically a modified EMF detector with a special mode that senses changes in the quantum flux and supposedly allows spirit energies to manipulate the unit to answer yes or no questions via the “pings” of the needle.

However, I wanted my own proof, so I started using it… The results have been astounding… All of the answers we get have made sense. We test it extensively and have asked it questions we already knew answers to and it was correct… We have also had EVP evidence that validated the answers on the Meter…

Though I still may not be 100% certain about this device… I am now over the 90% mark for sure! … You can see it in operation in almost all of our videos through the link in my signature.
Go to Source