A ghost or spectre is the manifestation of a person or animal that has passed from the physical world.
END_OF_DOCUMENT_TOKEN_TO_BE_REPLACED

What type of ghost is it

2)Ghosts of the dead (that do interact with the living)

4)Ghosts of the living (that do interact with the living)

5)Ghosts of the living (that do interact with the dead)

7)Ghosts that interact with other ghosts.

NB: Apologies if this is a little “Alice In Wonderland” but I’m attempting to clarify the need to understand different types of entities/encounters

Ghosts of the dead (that do not interact with the living)

This group of apparitions are seen to be re-enacting moments in time when they were alive. To say “when they were alive” is misleading really as the spirit seen is still alive but is able to be viewed by another human being from another time. In this category though the ghost being observed is entirely unaware of being watched.

Ghosts of the dead (that do interact with the living)

This group is infinitely more complicated to understand. Manifestation in this section fall into the sub-catagories below:-

1)Those ghosts who are seen as they were (are) going about their daily business as it was (is) in another time. Not only can they be seen by people from the present time, they can also hold a conversation with us. Presumably they are fully aware of our presence as we are of theirs and they may even report their sighting of “Ghosts from the future ” to their friends.

2) Those ghosts who seem to be stuck in a building and are unaware of their loved ones as having passed on. This type of spirit is not being seen going about his/her daily routine, as they have passed on but remain a permanent resident of a particular place. Sometimes they seem reluctant to accept they are dead. It’s almost as if they’re in a pemanent dream-like state of semi-consciousness loosely clinging on to familiar ground.

3) Those ghost who are dead and know they are dead but refuse to leave a building. Often this type of spirit makes a point of interacting with people from the present and this may be humorous or malicious.

Ghosts of the living (that do not interact with the living)

Ghost of the living are souls who’s physical presence materializes in a place remote from their current actual location. If you dream of a nice place maybe one or two % of your material being is transported to that place.The more lucid the dream the greater %’age of your physical being is transported there. If you can visualize the place you may be 1/ 2 % physically there. If you can hear the sounds as well you may be 15% physically there. If you can feel the sun on your back, have full visual awareness and hear the sounds – you may be 40% physically there. Experts (eg: Tibetan Monks) are said to be so adept at these skills that they can be seen at places they meditate upon. There are occasions when non-experts can also display such “re-location” skills – such events though are mostly a one off and generated by stronger than usual emotions for a given place or event or caused by multiple repetitions of a particular act.

Ghosts of the living (that do interact with the living)

I once read of an extremely odd occurrence where a man used to drive the same route every day. This trip took him to his destination where he would attend to some business affairs and then return home. The tasks he had to perform were of very short duration but dealing with them personally was the way this individual liked to work. On one particular day the person in question was uncharacteristically some 15 minutes late in setting off from home. As he approached his destination whilst negotiating a round-about (traffic system) – he was horrified to see himself coming back the other way and further stunned by witnessing his other self staring back at him with equal incredulity. Clearly his vision was of himself where he would have been if he’d been on time. Never before has the quote. “There are just as many ghosts of the living as there are of the dead” – been more vividly encountered.

Ghosts of the living (that do interact with the dead)

The ghost of a living person is the substance of that person that has materialized in a place remote from where they physically are. If a person in this tenuous state was to communicate with the spirit of a dead person – then we have an occasion where a ghost of the living has interacted with a ghost of the dead.

Ghosts of the living (that do not interact with the dead)

If the ghost of a living person (detailed above), is seen by ghosts of the past but cannot see or hear those ghosts themselves – then we have an example of ghosts of the living (that do not interact with the dead).

Ghosts that interact with other ghosts

This last section identifies the most bizarre type of encounter imaginable – one where a ghost sees another ghost. As with all the above sections, these events can also involve both the living and the dead and can be interactive or otherwise.

What are ghosts & what is living

There is no doubt that a living person who sees a non-interactive ghost from the past – is actually seeing that event unfurl. From this we must conclude that we have to re-think our ideas on the passage and nature of time. If that ghost is interactive with our living observer we have to begin to accept the soul or essence of man as being immortal. When we consider ghosts of the living we are up against the possibility that all of our experiences may indeed be manifestations of our own minds will and that “Reality Creation” is a real deal. I believe that we will eventually fully understand all the mysteries behind ghost sightings. People wrongly use the phrase “super natural” as if this phrase can in some way defuse the subject by placing it beyond our reach. I say that all things “Super-Natural” will be solved when the science catches up. By science I mean the application of current laws employed to refute the super-natural. I think we need to expand science to un-ravel the mysteries before us. Currently science says if an observed phenomena is beyond the known rules it can’t exist. The correct way for science to advance is to accept the obvious truth (no matter how bizarre) and then advance science to accommodate a solution.
Go to Source

What The Map Revealed

From 2005 until 2010 and with the help and support of Sander/Moses Productions, I promoted the CBS TV Series “Ghost Whisperer” quite extensively through my website. I had descriptions of episodes, brief character bios, brief bios of the stars, information on music used in episodes, a forum, a chat room, a guestbook and a hit counter with map showing where people would hit my website from. One particular evening after a particularly chilling episode, I decided to go into my office to check the hit counter. One hit came from Los Angeles, California. I excitedly thought that someone from Universal at Sander/Moses must have checked out my website. As I zoomed in on the location, I noticed that the location of the hit came from south of Universal Studios. I zoomed in again and noticed that the location was just a little bit north of I-10. I zoomed in closer and was puzzled as all the streets gave way to what looked like an open field. “What’s going on here”, I asked myself? Puzzled, yet pleased by the mystery before me, I pulled up Google Earth and matched it with what I had visible on my Map. I found the field and zoomed in closer. As I did and got a good look at the location of the page hit, I got chills from head to toe! It reminded me of an old episode of the Twilight Zone.

“It’s impossible for anyone to call you from that location.”
“What location?”
“The cemetery!”

Rosedale Cemetery to be exact.
I checked the time in which the page was hit.
8:30PM. Three and a half hours after the gates closed and when Los Angeles was in full dark.
Was someone from the grave trying to contact me or was someone making a joke?
Anything is possible. 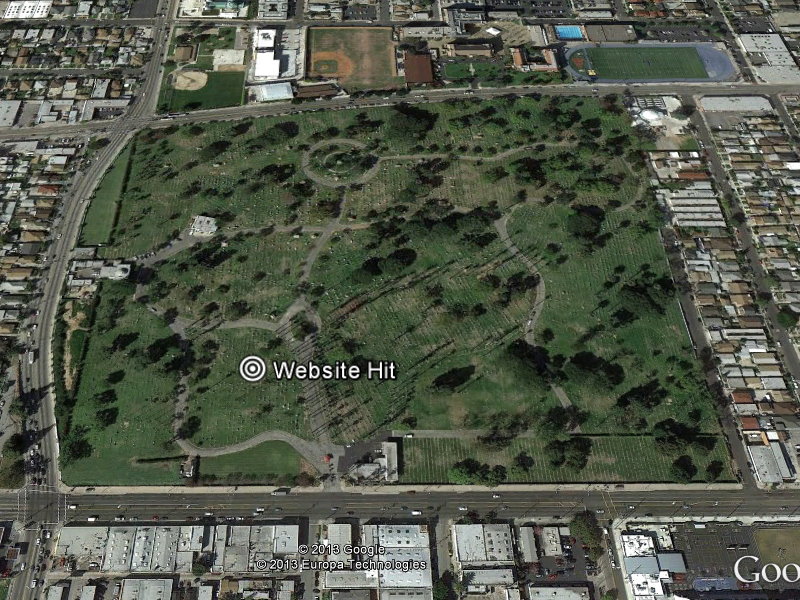